Dearly beloved are you listening? / I can’t remember a word that you were saying / Are we demented or am I disturbed? / The space that’s in between insane and insecure / Oh therapy, can you please fill the void? / Am I retarded or am I just overjoyed / Nobody’s perfect and I stand accused / For lack of a better word, and that’s my best excuse

To live, and not to breathe / Is to die, in tragedy / To run, to run away / To find, what you believe / And I leave behind / This hurricane of fucking lies / I lost my faith to this / This [valley] that don’t exist / So I run, I run away / To the lights of masochists

And I, leave behind / This hurricane of fucking lies / And I, walked this line / A million and one fucking times / But not this time  / I don’t feel any shame / I won’t apologize / When there ain’t nowhere you can go / Running away from pain / When you’ve been victimized

It’s safe to say we can all agree marriage is a commitment that goes beyond a typical relationship, even long term common wealth relationships. I just realized filing taxes as a married middle class couple sucks. I miss 2016 tax filing time. Anyway, married couples do have something our common wealth counterparts do not. Weddings!

Chop Zuey’s Sub Umbra Floreo Bridal is the perfect piece to add that last and perfect final touch to any wedding gown.

If you’re going to commit yourself to filing married, you might as well start it off in style, ya know? No second thoughts. It’s too late!

Divorce only works when one stops loving his or her partner in marriage. Plus, I joke. I’d much rather have my hubby than tax perks (See RL husband? I love you so much I wrote about you in my SL blog. Bonus points?)

So, that’s my advice for the day. I also advise you to visit Designer Showcase and Pose Fair as soon as possible because April is going to end. We won’t see another April until next year. Weird when one thinks about it that way, eh? Speaking of Pose Fair, I thought you should know. Corpus’s Editorial poses have attitude and emotion. Manifeste is one of my oldest favorites when it comes to pose makers. They also mix fashion, emotion, and attitude. Looks like they are meant to be. 😉

I hate to break it to you, but there is usually a bigger picture. It goes beyond he said she said scenarios too. It’s literally opening up one’s perspective and it ain’t always fun.

Trust me. If things seem wrong or dangerous, they probably are. Broaden your scope.

Once you broaden your scope, you’ll see the bullshit for what it is because “worldly comfort is an illusion” (Mirabai) in your particular case. Now once you do, it’s your turn.

It’s your turn to walk away from what deceived you in the first place. Emotional wars are exhausting, and sadly so many, including me, fight for the wrong reasons. You probably won’t read this. One, you don’t have a blog and two, you probably forgot about my grown up virtual Barbie doll games/online journal. If you do, know I love you and I will be there when and if you need help walking away.

Post title and inspiration pinched from Chop Zuey and Mirabai

Instead, “Live for each second without hesitation.” I tend to revert to timeless classic songs when I try to make sense of life. You know? Songs never let me down. The songs we tend to hold onto or remember in trying times are an unspoken heart around our neck.

Or on our wrists, ears, and sleeves, so I say drown in hearts. Valentine’s Day has passed, but the heart is a symbol of love and life. Mostly life. The brain may have more to do with the emotion we call love, but let’s not go there. Okay? Let’s just drown in hearts. ♥

Speaking of hearts and love, Chop Zuey’s “A Poor Heart Aflame” is a must have for all romantics. It’s a mix and mash to suit any occasion with several heart pendants, silver or gold chains, and pearls. Drive your color choices with the Hud. The matching heart earrings and bracelets complete the love.

At this moment, I’m wearing Chop Zuey’s “Dream of the Rood.” Readers, sometimes life has to suck before it gets good, and that’s what “Dream of the Rood” means to me, but it’s okay. At the end of the day, we can triumph over our demons. I’m preaching now.

In retrospect, what inspires us is a telling moment because it identifies the way we felt for but a moment.

With 2017 about to roll in and my piece o’ land. in an odd place, I have no choice but to revert to my old ways. Have faith in freedom. Cheers!  🍷

This is a continuation of an earlier post.  My boss walked into my office in the middle of a Taylor Swift binge, so I shared why I appreciate her lyrics. I’m not sure he bought it, but I let him know that some of my favorite Swift songs have described some of my deepest and painful heartbreaks. Suddenly, I remembered heartbreak may be a natural occurrence.

In an earlier blog, I wanted to save my younger co-workers from heartbreak, but that’s not possible. They need it. I had it, and my breakups were tragic at the time.  Fast forward > I ended up with my hubby aka love of my life. Really, I think I needed to experience love lost because I don’t think it would have worked had I met my hubby earlier.

In a breakup, the tunnel seems bleak, but there really is light at the end. Of course, we can’t see it until we reach the end.

The inspiration for this post was Swift’s song “All you had to do was stay.” It reminds me of my first heartbreak. We’ll call him AB. He was the start of my dark relationship tunnel and the only one who wanted to get back together after we broke up. Too much had happened in the meantime such as “picking up the pieces of the mess [he] made” and all I could think of was “but not like this.” Like I said…it seems dark, but keep moving. 😉

Sorry hubby. I’m in love with San Guerlian, but don’t worry. It’s a platonic love. Chop Zuey Couture Jewelry is a beautiful addition to Designer Showcase’s August round, and Belle Roussel has a very special edition of the San Guerlian Cameo Set available just for you.

Do you feel the love now? The set includes earrings, bracelets, a brooch, and 5 mixed cameo, pearl, and gemstone choker and necklaces you can layer on for a multi-strand look or just wear each piece individually.

That’s a lot of jewelry for a special 50% off price  and the pearls, gems, metals, and Cameo are texture and color change. Ooh, it’s so romantic!

Want a lift? Click Designer Showcase for your ride.

Liv’s Glam always comes out with the cutest mesh dresses ♥ This one has the nicest draping and the sexiest back ever! What’s more it’s part of one of two items for Fifty5 Thursday this week…and hoooray it’s Thursday! Take this limo to Liv’s and get yourself an awesome dress for only 55L! 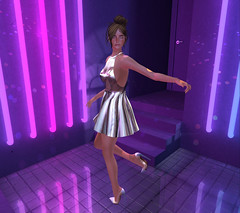 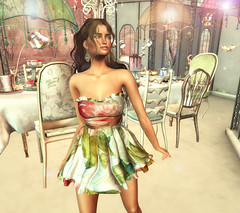 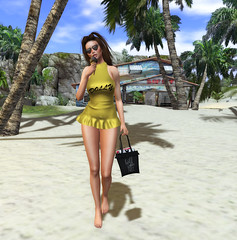 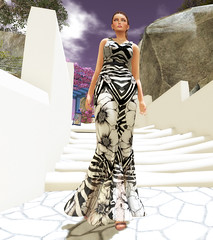 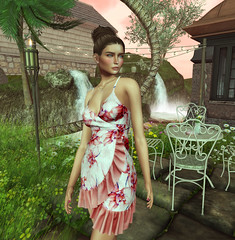